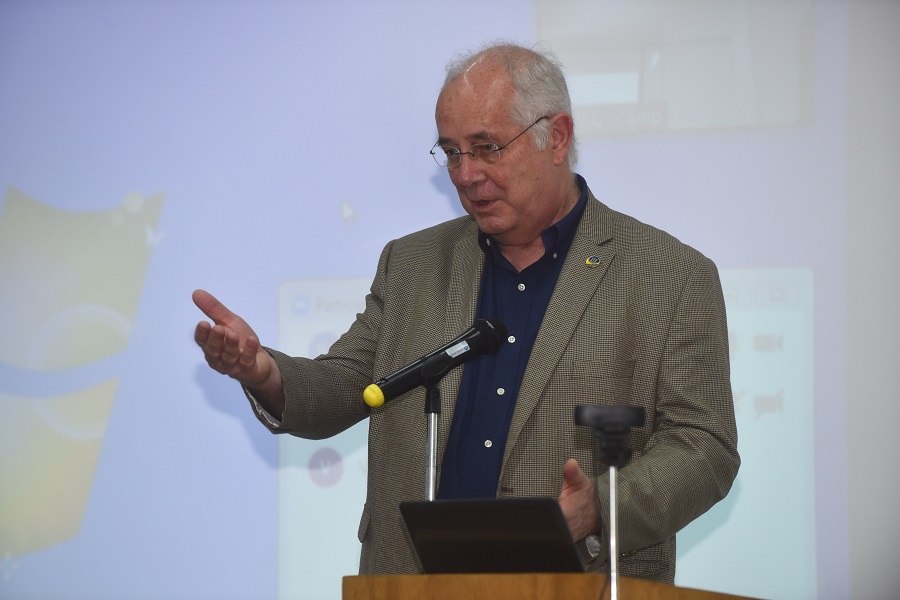 With profound sadness we announce the passing of our dear colleague, Prof. Ronald Cintra Shellard, on 7 Dec 2021. Born in São Paulo, Prof. Shellard was a pioneer and leader in the fields of particle and astroparticle physics in Brazil, whose impact is hard to quantify. For over 30 years he had a central role in their development in the country and, most notably, was instrumental in promoting Brazil's collaboration with CERN.

He was also strongly involved in many projects for the study of cosmic rays. In doing so he helped to establish several important international collaborations for Brazil, including with the Pierre Auger Observatory and the Cherenkov Telescope Array (CTA), both of which he participated in from the very beginning.

Since 2015, Prof. Shellard has been Director of the Brazilian Centre for Physics Research (CBPF), in Rio de Janeiro, where he worked as a researcher for almost three decades. He obtained his PhD from the University of California, in Los Angeles, in 1978, and before moving into Astroparticle Physics, Shellard participated in experiments at Fermilab and CERN. Among his many duties, he was also a member of the Brazilian Academy of Sciences, the Astroparticle Physics Forum (APIF) and the Board of Directors of the Latin American Centre for Physics (CLAF). He also chaired the 2013 International Cosmic Ray Conference, in Rio.

More recently, Ronald Shellard was one of the main proponents of the LATTES project, and had a central role in the convergence of the international community of the field towards the foundation of the Southern Wide-Field Gamma-ray Observatory (SWGO), strongly promoting the Brazilian and the South American involvement in the experiment. He was currently serving as a member of the SWGO Steering Committee, as country representative for Brazil.

Shellard was also deeply dedicated to the importance of science outreach in society, and had an enormous appreciation for the value of scientific education. He was behind the creation of many important initiatives in Brazil in these fronts, such as the Residency Programme of Secondary Teachers at CERN, and the Professional Masters Degree in Physics Education, in cooperation with the National Coordination for Superior Education, CAPES.

Shellard will be remembered by his many friends and colleagues for his captivating personality and his joyful and spontaneous ways. A natural leader, he was tireless in his dedication to the development of science in Brazil, which he was instrumental in defending and for which he firmly advocated. We will miss his positivity, generosity and warmth, and his aggregating and constructive character.

He was a continuous source of ideas and plans for the future. His life and trajectory leave an important legacy in the field of Astroparticle Physics, and to Brazilian science in general, and his determination will be a lasting example to many of us. It is with a heavy heart, and much gratitude, that we bid farewell to him.

Our thoughts are with his family, friends and colleagues in Brazil, and all over the world.